Green Lantern The Animated Series Wiki
Register
Don't have an account?
Sign In
Advertisement
in: A to Z, Merchandise

DC Direct released two limited edition maquettes, to accompany the official release of Green Lantern: The Animated Series in spring 2012. There is all together three maquettes: Hal Jordan, Atrocitus, and Saint Walker. 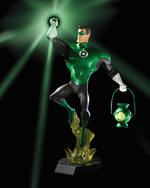 The power ring shines its emerald light across a darkened universe, a symbol of law and order wielded by intergalactic police officer HAL JORDAN. Chosen by the ring for his ability to face fear head on, test pilot Hal Jordan possesses the strength of will to overcome even the most mind numbing of terrors. Now, as an integral part of the GREEN LANTERN CORPS, he patrols the galaxy as the protector of Sector 2814, wielding emerald energy against evil – wherever it manifests. Measuring approximately 12.3" high x 6.4" wide x 5.5" deep, this handpainted, cold-cast porcelain statue is packaged in a 4-color box. Limited Edition. 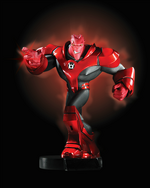 With blood and rage of crimson red, comes a maquette to place above your bed! From the upcoming Green Lantern animated series comes the powerful and vengeful Red Lantern, Atrocitus! No collection can be complete without this fearsome foe! Measuring approximately 8.25" high x 8" wide x 6" deep, this hand-painted, coldcast porcelain statue is packaged in a 4-color box. 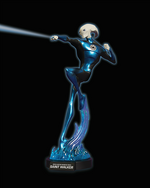 FROM THE NEW CARTOON NETWORKSHOW! In fearful day, in raging night, this brand new statue will make everything right! Armed with the power ring of hope, Saint Walker is an inspiration to all who own him – just remember to pair him with a Green Lantern for maximum effect! Measuring approximately 10.5” high x 6.5” wide x 5” deep, this hand-painted, cold-cast porcelain statue is packaged in a 4-color box.

Community content is available under CC-BY-SA unless otherwise noted.
Advertisement