Changing the profile image (the image in the article's infobox, or the top image to the right of the introduction to a large majority of articles) is one of the most common proposed changes to articles on Green Lantern The Animated Series Wiki. Due to the regularity with which profile image changes are suggested, Green Lantern The Animated Series Wiki centralizes these changes on this page. 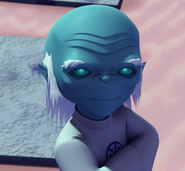 He's wandering off into space on the first one. :P The second one shows him at a bad facial expression for his character. Ganthet is always happy, well mostly happy. I'm down for 1 for 3. --REGULAR GUY (Message me) ٩(͡๏̯͡๏)۶ 23:00, January 14, 2013 (UTC) 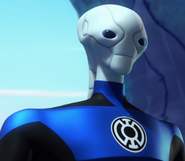 3. I originally was going to say 2 but I prefer the revision to it. --The Stone That The Builder Refused.

The current one, well to me, was just a placeholder. The old version doesn't really represent the episode very well in terms of the plot. The new one does. "Turning on the Central Battery attracts Manhunters". --REGULAR GUY (Message me) ٩(͡๏̯͡๏)۶ 02:27, January 15, 2013 (UTC)

The current one is okay, but her mouth is open. Though, I'm not to fond of the proposal it is still a better image then the current. The expression on her face in the proposal is how her face is 99.99% of the time on screen. REGULAR GUY (Message me) ٩(͡๏̯͡๏)۶ 18:07, January 21, 2013 (UTC)

Yeah, the new one looks better. Although if I may ask, can you crop the picture a bit more? I believe the image would benefit from being cropped to focus more on Aya, like the Saint Walker image. The Stone that the Builder Refused 19:11, January 21, 2013 (UTC)

Cropping it more would ruin it for the portalskin on the main page. If you can find another image that meets the standards, then by all means upload it. --REGULAR GUY (Message me) ٩(͡๏̯͡๏)۶ 02:01, January 22, 2013 (UTC)

3's background is annoying me and she is leaning more to the right than in the center. I take back my earlier vote, #5/#1/#4 is best.

He looks too serious in the current and for some reason it's zoomed in on his face real tight. The proposal isn't perfect, and destine to be replaced, but I'd go for it for now. REGULAR GUY (Message me) ٩(͡๏̯͡๏)۶ 17:53, February 2, 2013 (UTC)